The British Columbia Provincial Nominee Program (BC PNP) held a draw on November 28 after one and a half months of waiting.  A total of 326 applicants were invited to apply for permanent residency (PR) under five different categories.

Normally, BC PNP draws are held every week (mostly on Tuesdays), but they were halted to implement TEER codes.

In the general draw, 253 invitations were issued to skilled workers and international graduates in five BC PNP streams, including tech occupations. The minimum score ranged from 82 to 105 points.

The targeted draw also invited 49 skilled workers and graduates with at least 60 points to apply as Early Childhood Educators and Assistants under NOC 42202.

In a draw targeted at healthcare workers, 24 invitations were sent to skilled workers, international graduates, and entry-level and semi-skilled workers with a minimum score of 60.

Another set of ‘less than 5’ invitations went to entry-level and semi-skilled workers targeted at Health care assistants under NOC 33102, with a minimum score of 60.

In the final pool of ‘less than 5’ targeted invitations, skilled workers and international graduates under NOCs 31103, 32104 were invited, with a minimum score of 60 for Regional, other priority occupations 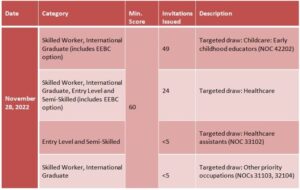